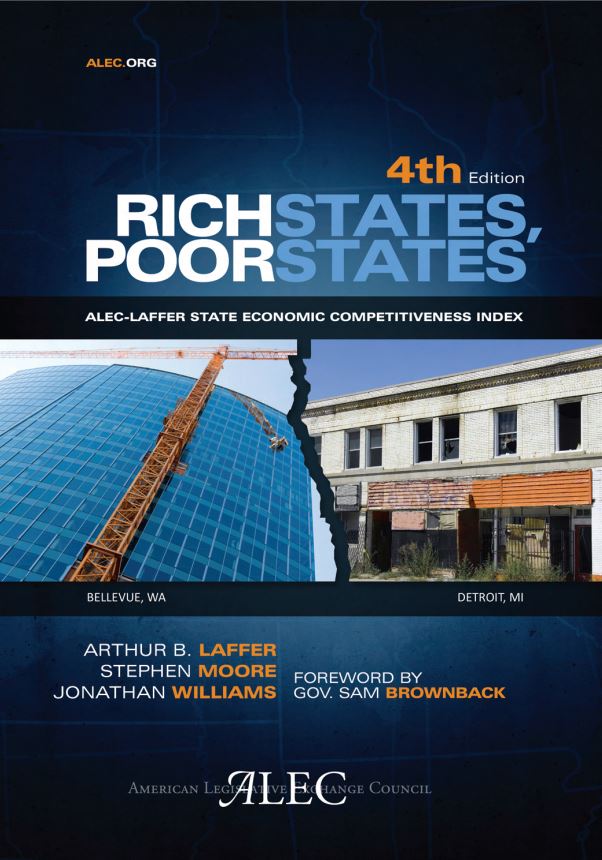 What Others Are Saying…

“Nothing better demonstrates the essence of why ALEC was founded than Mr. Laffer, Mr. Moore, and Mr. Williams’ Rich States, Poor States.  It shows policies that fail, policies that succeed, and how state legislators can improve the lives of the people in their own states.”
– Louis Wm. Barnett, Chief Deputy of Vice Chair Michelle Steel, California State Board of Equalization

“In 1970, New York had 18 million people. In 2008, it had 19 million. In 1970, Texas had 11 million people. In 2008, it had 24 million. Laffer, Moore, and Williams explain why high taxes and high government spending drive jobs and people out of states and how taxes and low government spending bring them in. The facts and figures they provide in Rich States, Poor States make an irrefutable case.”
– Michael Barone, Washington Examiner, American Enterprise Institute, co-author, The Almanac of American Politics

“Rich States, Poor States documents well and clearly the fact that citizens of market- friendly states enjoy more prosperity than do citizens of states less friendly to markets. In particular, the evidence on the destructiveness of high taxes has never been more vital.”
– Dr. Donald Boudreaux, Professor of Economics, George Mason University

“Rich States, Poor States affirms what states have done to either bring about success or failure during these highly competitive times. This is a book that every state policymaker should study if they want their state to weather the current economic storm.”
– State Sen. Jim Buck, Indiana, Chairman of ALEC’s Tax and Fiscal Policy Task Force

“For decades, ALEC has served as a guardian of Jeffersonian principles in America’s state capitals, providing important and timely resources to state legislators. Rich States, Poor States is a much-needed tool for lawmakers across America who are working to boost state economic competitiveness and prosperity.”
– Former Governor Pete du Pont, Delaware

“It is often said that economists cannot experiment with the economy in the same way that other scientists can test their theories.  But the states are 50 different laboratories testing the pros and cons of various levels of spending and taxation.  Rich States, Poor States documents the results of those experiments.  The authors demonstrate loud and clear that limited government and low tax rates on employers, workers, savers, and investors contribute mightily to prosperity.”
– Stephen J. Entin, President and Executive Director, Institute for Research on the Economics of Taxation

“Rich States, Poor States is really a tale of two philosophies – states which pursue the path of promoting private-sector job creation, lowering taxes, keeping regulations reasonable, and not treating employers as villains will prosper. Those that take a different, opposite path reap what they sow and wind up with fewer opportunities and a dimmer future than other states. This study provides all the evidence a state needs to follow the first path – if the facts are a prime consideration in their decisions.”
– John Fund, The Wall Street Journal

“The name of the game is to make our states and nation more economically competitive.  Laffer, Moore and Williams clearly define the economic and fiscal policies which contribute to growth and sustainability. If lawmakers have the intent to develop jobs, opportunity, prosperity and safety for their respective states and their citizens Rich States, Poor States is a must read.”
– Robert Graham, President/CEO, RG Capital, LLC

“The Great Recession has taken a correspondingly great toll on state budgets. Yet, states that have put in place the strongest pro-growth economic policies have been able to weather the storm much better than states with the highest taxes, highest government spending, and most burdensome regulation. Year after year Rich States, Poor States puts forth compelling new anecdotes, data and theories to back up the commonsense economic policies Tennessee continues to count on for long-term economic growth.”
– Governor Bill Haslam, Tennessee

“During today’s difficult economic times, many lawmakers are facing pressure to increase taxes. However, Rich States, Poor States, gives my fellow state lawmakers clear evidence that taxes are not the answer to state budget shortfalls. In fact, high taxes, along with profligate spending policies, caused many of today’s problems. Rich States, Poor States is another great example of how ALEC is taking the lead to protect taxpayers by promoting sound policy to state legislators.”
– William J. Howell, Speaker of the Virginia House of Delegates

“The data and analysis from ALEC on state economic conditions is a powerful resource for policymakers who care about reducing spending so they can begin reducing taxes. It’s both a report card and a score card. Frankly, Ohio’s not doing as well as it needs to do. The information that ALEC provides helps us understand our competitive position and helps spur us to do better.”
– Ohio Governor John Kasich

“Rich States, Poor States adds to the mountain of evidence demonstrating that high taxes, big government, and poor labor policy are toxic to economic growth in the states. The authors and ALEC have created a wonderful resource for anyone looking to make their state more competitive, and I wholeheartedly encourage you to take their message to hear. This book is a must-read for state lawmakers who are serious about free-market tax and budget reform.
– Larry Kudlow, CNBC’s The Kudlow Report

“Never in our history has economic competition among states been more important. Limited and effective government services, together with prudent fiscal and economic policies, are the means for creating pre-eminent business climates, thereby promoting prosperity and choices for future generations. Rich States, Poor States provides the required perspective and commentary to document how states have either stepped up to competitive economic challenges they face or taken politically myopic and expedient paths. Essentially, this seminal work underscores the wisdom of our Founders’ legacy of federalism, whereby states individually select peaceful policy pursuits, the results of which ultimately differentiate business climates to be emulated versus those to be consigned to the trash heap. The authors have given us a very readable account that will prove pivotal to the learning curve of the reader and the nation.”
– David L. Littmann, Senior Economist, Mackinac Center for Public Policy, Former Chief Economist, Comerica Bank

“Rich States, Poor States provides legislators, policy makers, and the American people with in-depth, timely, and honest insights into which public policies encourage economic growth and prosperity and which do not. Armed with the facts and a clear prescription for how to make America more competitive, states are then able to avoid costly misadventures in big government and instead focus on positive, proven solutions that empower entrepreneurs and create opportunities for their citizens.”
– U.S. Congressman Tom Price, Georgia

“The states are encountering structural deficits and debt issues not unlike the federal government. Rich States, Poor States provides one of the best guides to the causes of this fiscal crisis. It also highlights policy reforms in states that have begun to successfully address these problems.”
– Dr. Barry Poulson, University of Colorado

“We as a nation are on the verge of a serious philosophical change. If government has a clear, straight-forward tax structure and a fair and balanced regulatory system, the jobs will be created and we can get back to a world class education system combined with quality health care, functioning roads and bridges, and safer streets.  Rich States, Poor States provides decision makers with empirical data that help us accomplish this change in philosophy.”
– State Sen. Tonya Schuitmaker, Michigan

“One major lesson from my years in corporate America is that where you do business really makes a difference. The best state governments realize that their citizens are making those calculations all the time. Rich States, Poor States is a great tool for those lawmakers intent upon increasing state economic prosperity.”
– Governor Rick Scott, Florida

“Rich States, Poor States is a key document for anyone dealing in public policy debates.  The articles go to the heart of state issues and provide valuable advice to legislators, staff, and citizens.  The data are extremely useful for both guidance and empirical evidence supporting the case for a market-based free society.  Don’t leave the office without it.”
– Gary Wolfram, William Simon Professor of Economics and Public Policy, Hillsdale College and former Deputy State Treasurer State of Michigan

“Decades of high taxation and overregulation have turned California from the Golden State to the Nanny State.  California faces the second-highest unemployment rate of the fifty states, and the worst business climate in the U.S. More than ever, policymakers in California – and across the nation – need the guidance of Mr. Laffer, Mr. Moore, and Mr. Williams’ Rich States, Poor States.  It is a brilliant look at why tax and spend policies break budgets, and only free-market and limited government solutions can bring us back to prosperity.”
– Vice Chair Michelle Steel, California State Board of Equalization

“Taxes destroy income, wealth, jobs, and innovation. Laffer, Moore, and Williams demonstrate this in a multiplicity of ways. ALEC’s Rich States, Poor States project is a welcome tonic to all the erroneous talk promoting government spending and taxation as a way to prosperity.”
– Dr. Richard Vedder, Professor of Economics, Ohio University

“Kudos to ALEC, Laffer, and Moore for proving scientifically what the small business community has always known to be true: lower tax rates mean more money to invest in job-producing activities.  This book should be carried in the back pocket of every state legislator who is fighting to create jobs by improving their state’s business climate.”
– Steve Woods, Senior Vice President of State Operations, National Federation of Independent Business